Each year several historic boats make the journey to be part of Crick Boat Show. Below are the boats that are confirmed to be on display in 2022 and more boats will be added as information becomes available.

The boats can be found at the far side of the Marina, in berths from F54

Sandbach was built in 1946 for the London, Midland & Scottish Railway (LMS), which owned the Trent & Mersey and Shropshire Union canals at the time.

One of a pair of tug/icebreakers built with wheel steering and a wheelhouse by W J Yarwood & Sons of Northwich. Sister tug was Beeston, both built 25 feet long, although Sandbach was lengthened to 35ft less than a year later.

On the nationalisation of the waterways in 1948, Sandbach was transferred to the British Transport Commission (later British Waterways Board) as part of the maintenance fleet, based initially in Middlewich, and later (by the 1970s) on the River Weaver.

Later abandoned and sunk, she was rescued by Malcolm Braine in 1982, and restored at Norton Canes. The original engine was a Russell Newbery DM2 but now has a 1953 Bolinder 1052, (two cylinder 23 hp).

Enter your email address for latest news and offers from Crick Boat Show and Waterways World: 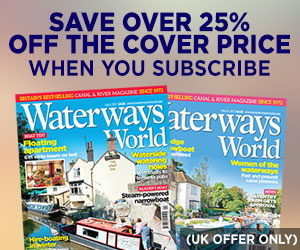 Every month, we explore the waterway system, test the latest boats and equipment, and look into the history and heritage of our canals – and our news coverage is unrivalled.

In an increasingly fast-paced and crowded world, the Canal & River Trust’s historic canals and rivers provide a local haven for people and nature.

We're the charity entrusted with the care of 2,000 miles of waterways in England and Wales

Since opening in 1996, Crick Waterside & Marina has become one of the most sought-after marinas in the country.

It has a great location on a 21-mile lock-free pound, ideal for relaxed weekends afloat, yet handy for all major cruising routes.

crickboatshow.com sets first-party and third-party cookies so we can monitor and improve the effectiveness of our website. You can control this using your browser settings.